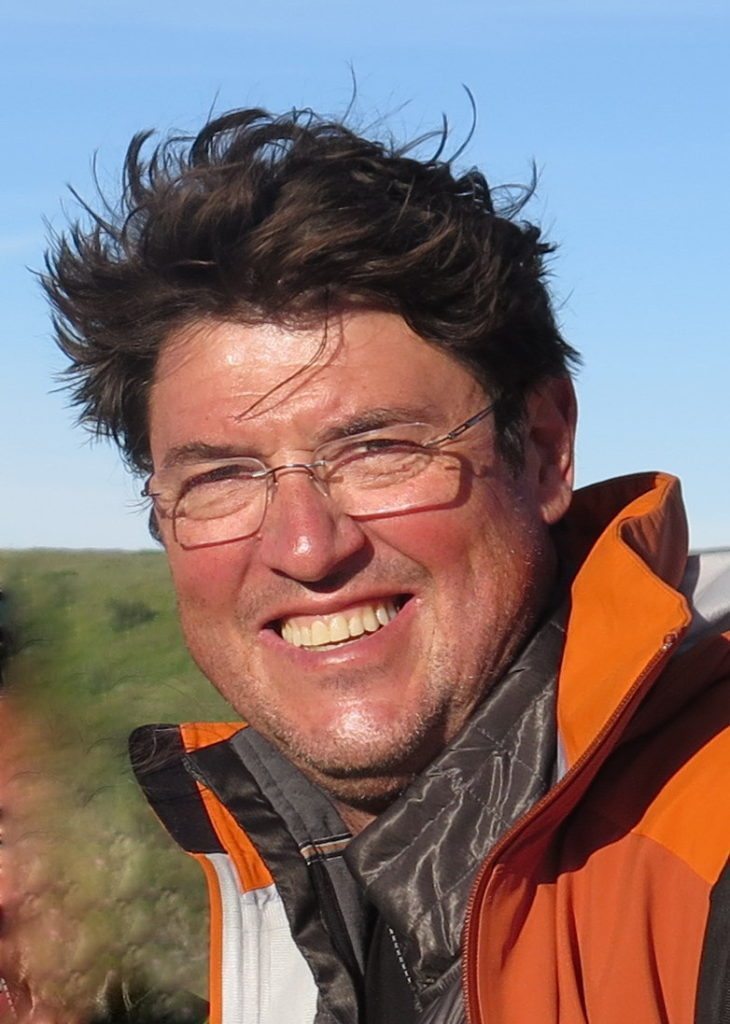 I am one of the founders of Ever Widening Circles, working with the team as CFO and the chief “User Experience” (UX for short) adviser.

Mostly because I don’t know a darn thing about website design, or anything else related to creating what you find here at EWC every day. I’m just an average level web-user. I know what works and looks welcoming.

So when the brains behind this project (Dr. Lynda and Liesl) want to test drive anything, they try it out on me!

My bio is a bit lengthy by web standards because we’d like people to know we are ordinary people behind this project.

Step off the Dr. Chuck bio train whenever you need to, otherwise, here’s my story as told by Dr. Lynda, my wife and EWC co-founder… 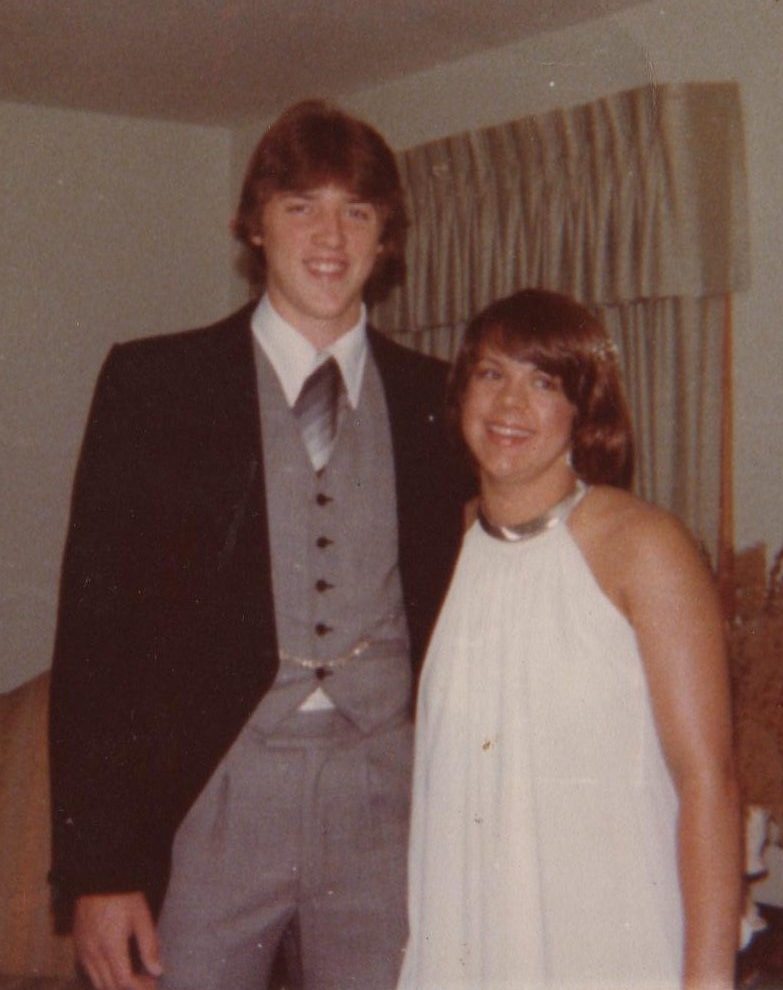 So why am I (Dr. Lynda) telling Chuck’s story? Dr. Chuck and I are childhood sweethearts, from the age of 14, so I’ve been along for most of the ride with Chuck.

Dr. Chuck and I hail from a typical Midwestern small town, Lincoln, Illinois.

Chuck’s basketball career was launched from humble beginnings, and he eventually became the captain of the University of Kentucky basketball team for two years (1980 & 1981). He guarded the great Michael Jordan, played professionally abroad, and finally, became a skilled dentist! 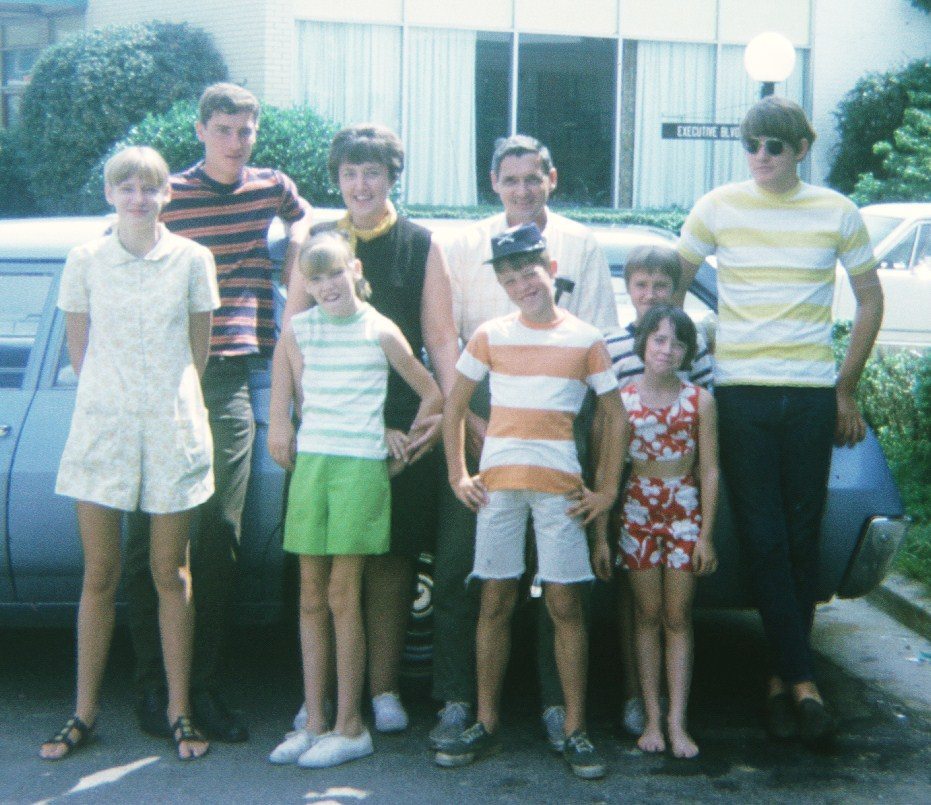 Chuck is the skinny kid in the orange stripes!

Chuck grew up the fifth child in a large family of nine (mom, dad, Chuck, plus six siblings). His dad laid tile flooring for a living. While the family sometimes struggled to make ends meet, they were wealthy when it came to love for each other and the goodwill they’d earned in the community.

Chuck grew up understanding the real value of a dollar. He loves to tell our children how he would collect the money from his paper route and sneak over to the local bakery to buy a dozen donuts on Saturday. Then, 12-year-old Chuck would hide in the nearby junkyard so he could greedily eat the whole dozen by himself, in peace.

We both grew up having to “make it work” a lot, and we tell our kids that great coping skills are the key to happiness.

Sometimes, we like to bring out this photo below. Look at it closely. You will notice that Chuck is running track in the eighth grade, on a cinder track, while BAREFOOT. NO SHOES! (He was WAY ahead of that fashionable current trend!) 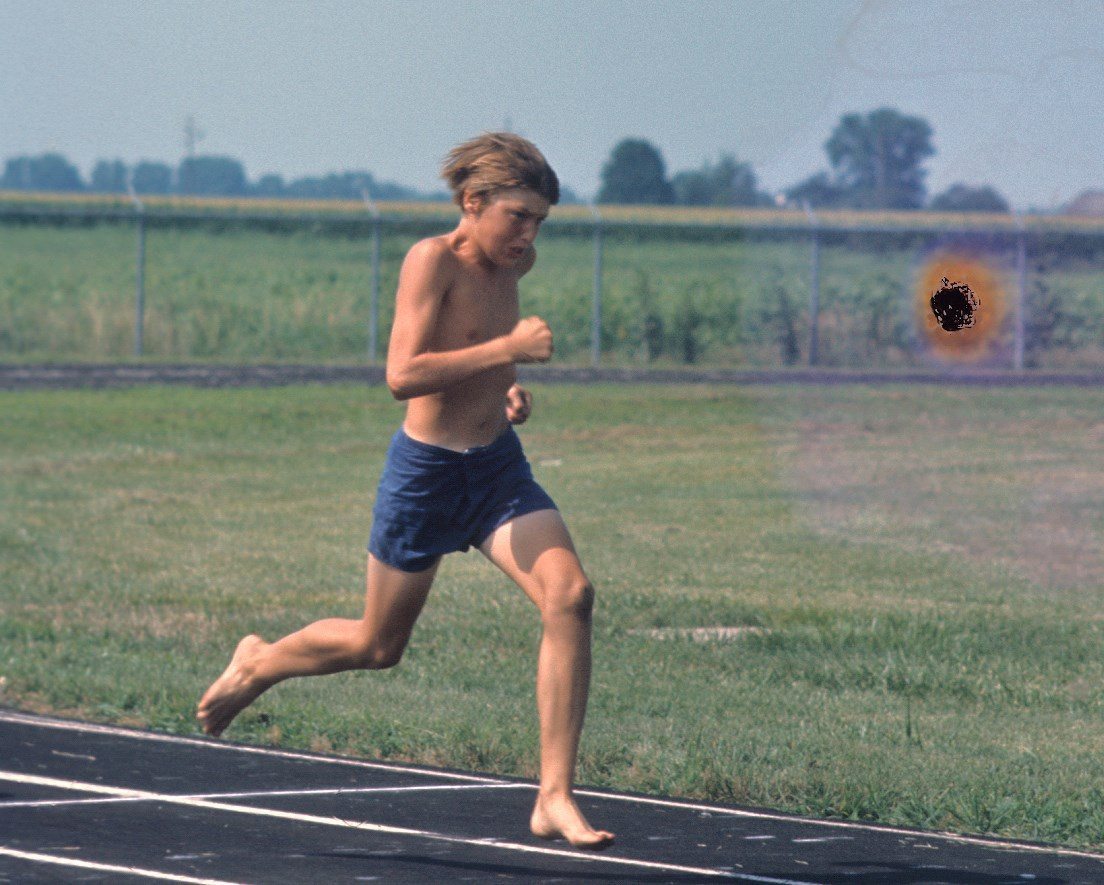 Good things often start with a dose of kindness…

One of Chuck’s earliest mentors was a lovely nun named Sister Carol. Though he didn’t realize it then, Chuck thinks that she saw something he couldn’t see in himself.

Chuck vividly remembers a day when Sister Carol took him aside in the sixth grade to give him a copy of the book Jonathan Livingston Seagull, by Richard Bach (an EWC favorite). It was a simple, yet powerful book about dreaming big, persevering, and soaring to your potential despite what everyone else thinks.

Chuck will tell you that this small gesture was the key that cracked open a door in his mind, and from that point on he (very privately) began to dream big.

And here is a strange twist: The author of Jonathan Livingston Seagull, Richard Bach, discovered EWC and he and his wife have become family friends of ours! Richard is also now a great supporter of the EWC mission. 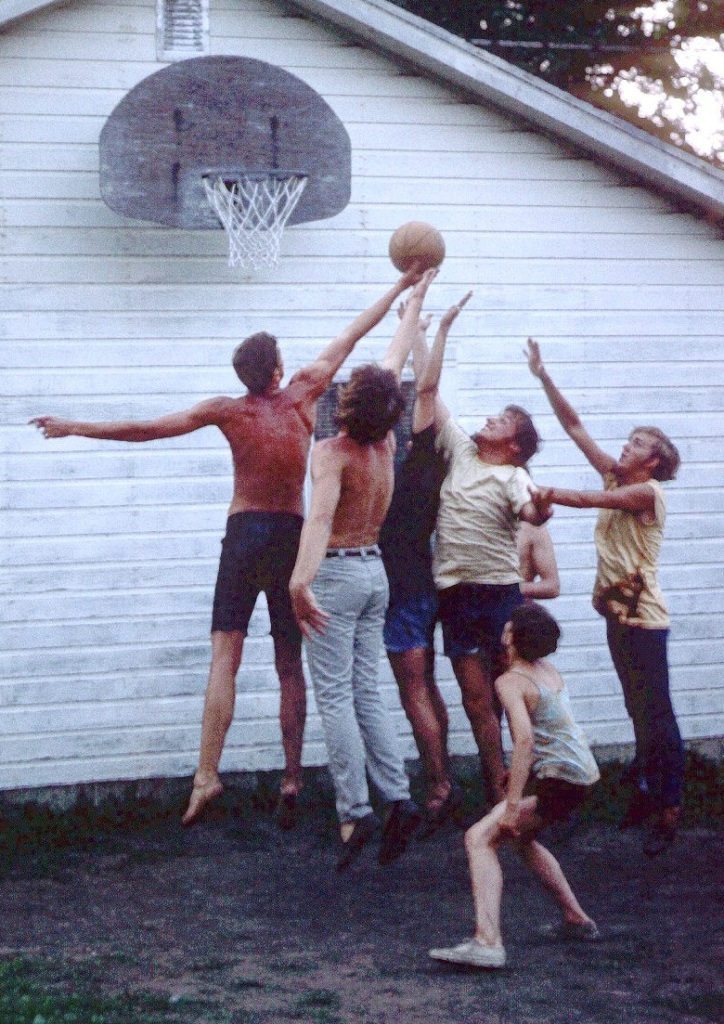 Chuck will tell you that he owes much of his success as a basketball player to his two older brothers, whose friends would come by all the time to play basketball on a homemade dirt court on the side of the Verderber garage. (Chuck’s the skinny, little guy still feet on the ground in that photo.)

This was the 1960’s and 70s mind you, around the time when Cassius Clay became Mohamed Ali (1964) and Lou Alcindor became Kareem Abdul-Jabbar (1971). On the make-shift Verderber basketball court, the long hair flew as much as elbows, and no one cut little Chuckie a break; he had to play with the big boys or suffer the consequences.

In 1978, Chuck became one of the top twenty players in the United States (a McDonald’s All-American) and got invitations to attend every big name university in the country. From Harvard, to Notre Dame, to the University of Kentucky.

And the adventures of a lifetime begin…

In 1978, the University of Kentucky was the premier college basketball program in the country, and they were recruiting Chuck hard when they won the NCAA tournament title that same year. In those days, no one in their right mind would pass up a chance to play there, and Chuck made the most of the opportunity. (For sports history buffs, you may know in 1978, UCLA had been in decline, and UNC and Duke were just beginning to hit their stride). 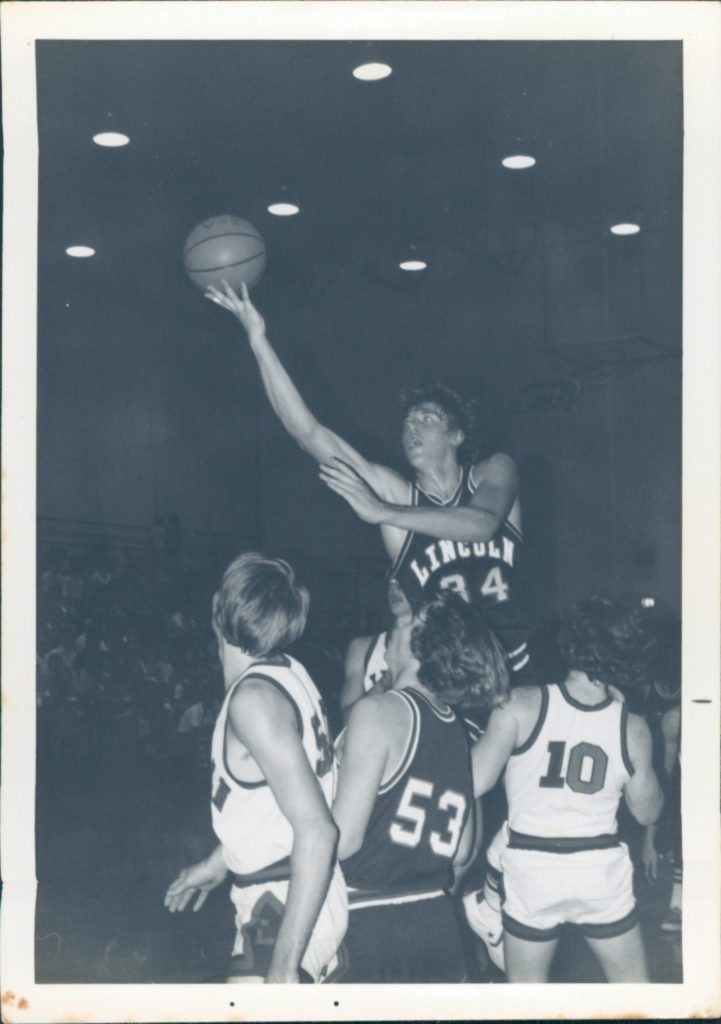 He arrived at the University of Kentucky with one battered, small suitcase and $75 to his name, yet he quickly showed leadership skills that would shape the rest of his life. Chuck took the hardest courses and the most number of credit hours you could take as a pre-med major, and the instructors in those courses showed no favoritism to the jocks!

It was all business in our basketball life, and all business in our biochemistry world. We were married before our senior year of college, and decided to apply to dental schools. Even though road-trips took Chuck away from classes a lot, we were a good team. I diligently tutored him to make up for all the lost time.

Chuck was a candidate to be an Academic All-American, and even qualified to be a Rhodes Scholar, but sadly, we learned about those honors too late to file the paperwork.

Chuck was a starter on the team for Kentucky much of his sophomore, junior and senior years. Additionally, he was named team captain for both his junior and senior years. He was a big, strong player, but he was also smart, usually getting the toughest defensive assignments like guarding Michael Jordan, Charles Barkley, James Worthy, or Dominique Wilkins.

In the last semester of our senior year in college (1982), Chuck was drafted in the seventh round by the Chicago Bulls in the NBA Entry Draft, but the realities of making that team and making a life in professional basketball in the United States did not thrill us. (Things were very different in those days.)

While the chance to play for the Chicago Bulls seemed the obvious choice, we were seduced by a different dream. Basketball had allowed us to travel the world a little while in college, and our “home” became wherever we hung our hats! We set our sights on creating a life abroad.

Our self-image as “global citizens” was born…

Chuck chose to play for a team in Spain and never even opened the letter from the Bulls.

In another exciting adventure, Chuck became one of the most promising players in European basketball leagues. Within weeks he was far and away the top scorer and rebounder in Spain. But as fate would have it, one night in a routine game, he blew out his Achilles’ tendon and that ended his basketball career forever.

The rest of Dr. Chuck’s story includes us both going back to Kentucky to enter dental school, during which time we continued to travel the world at every opportunity.

We were able to get Irish passports during our time living in Europe, so after dental school, when an Italian dental colleague asked us to take over his practice in Central Italy, we jumped at the chance.

I could start an entirely new story with those adventures, but suffice to say that we got a third language under our belts, and learned to roll with the punches yet again. Eventually, we returned to the U.S. and made a life here in Northern Vermont as dentists, parents, and active people in our community. 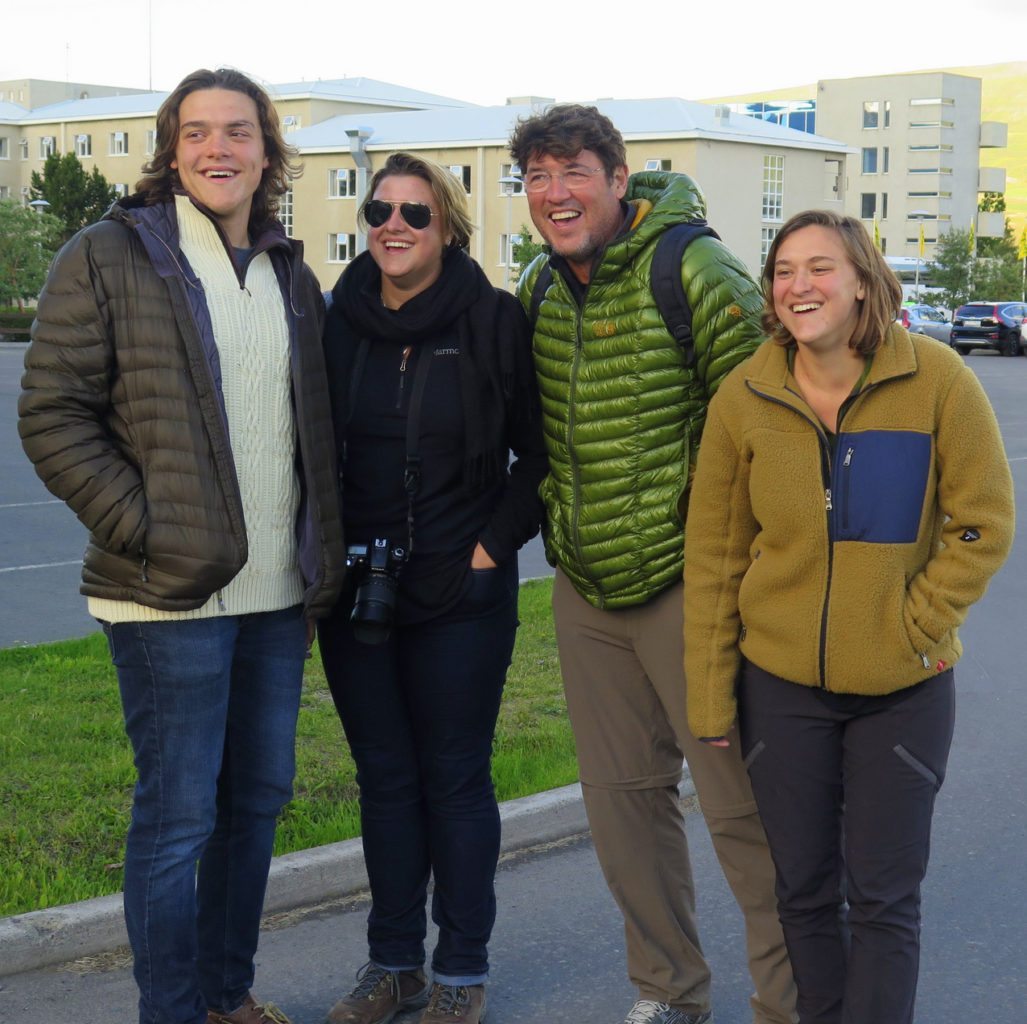 Today, Chuck and I have three children. We have two brainy daughters. Louisa, age 21, an engineer who had a provisional patent on a new kind of wind turbine before leaving high school, and Liesl, age 26, a Harvard graduate, who is the COO of Ever Widening Circles.

We also have a son who is 19 years old and is as big as his father. He plays basketball for Wesleyan University and is considered a mountain of a man,  bench pressing 315 lbs and dead-lifting 585 lbs. (He’s also as kind as his father.)

Our wanderlust was never dampened by raising children. We had our children traveling to the world’s backwaters by the time they could carry their own backpacks (age 6), and they also have a world view that is open and hopeful. They’ll sleep anywhere and eat anything, because they’ve been lost and hungry in the Andes Mountains, slept on wooden planks for beds in remote Tibet and climbed extinct volcanoes. Those sorts of journeys as a child tend to make one very flexible and goodnatured.

We have a busy home-life: gardening like crazy, creating art, and loving to cook and eat. We also manage a team of 13 people in our dental practice.

Dr. Chuck works tirelessly as a dentist to support our family and has been the sole underwriter for Ever Widening Circles. And now it’s time to bring others in as underwriters who can expand this project even further. If you know someone or a corporation that want’s to help Dr. Chuck change the negative dialogue about our times, send them our way!

It’s fitting that such a positive, hard-working person like Dr. Chuck is at the core of making this all possible! 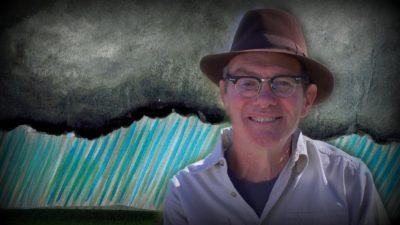 Kevin Kling’s “The Losses and Laughter We Grow Into”

Good comedian/story-tellers leave us with smiles that transform us forever. Here is a delightful conversation with one of the best. This guy can help us grow into our losses. 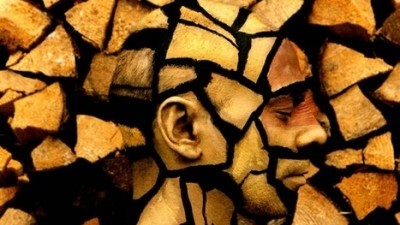 When Art, Science and Sport Combine…

Once in a great while, we come across the work of an innovator that crosses over many genres. No matter your passion – science, art, sports, philosophy, photography, dance – you will find this extraordinary innovator’s work is mind-bending. 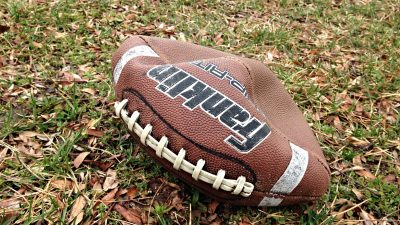 With Super Bowl XLIX behind us, questions still linger about “DeflateGate,” but is there really anything newsworthy here? The science is fascinatingly simple.

What she said 👆⠀ ⠀ Developing healthier hab

Have you signed up for the Seek The Joy Summit yet

What happens when a bear cub is abandoned or gets

Saw this little guy (and 4 others!) today while wo

Can we use nature as inspiration to better our bus

Spring is the season for all things fresh, and we