If you knew a secret would save lives, would you keep it? Indigenous peoples in Canada did just that for these rare, sacred white black bears. Their existence was kept secret until the 1990s for protection, and some people still do not know they exist! Ready for a look into their world?

The revealing of the spirit bear, also known as the Kermode bear, just a few decades ago brought about immense change including significant improvements in environmental protection, positive impacts on the lives of the people who live around them, and helpful benefits for other bears!

So why was this bear kept a secret for generations? And how did telling this secret lead to such a monumental turn of events? Let’s head to the Great Bear Rainforest—where these ghostly bears roam—to meet this extremely unique legend in the flesh and uncover some secrets in our own towns. 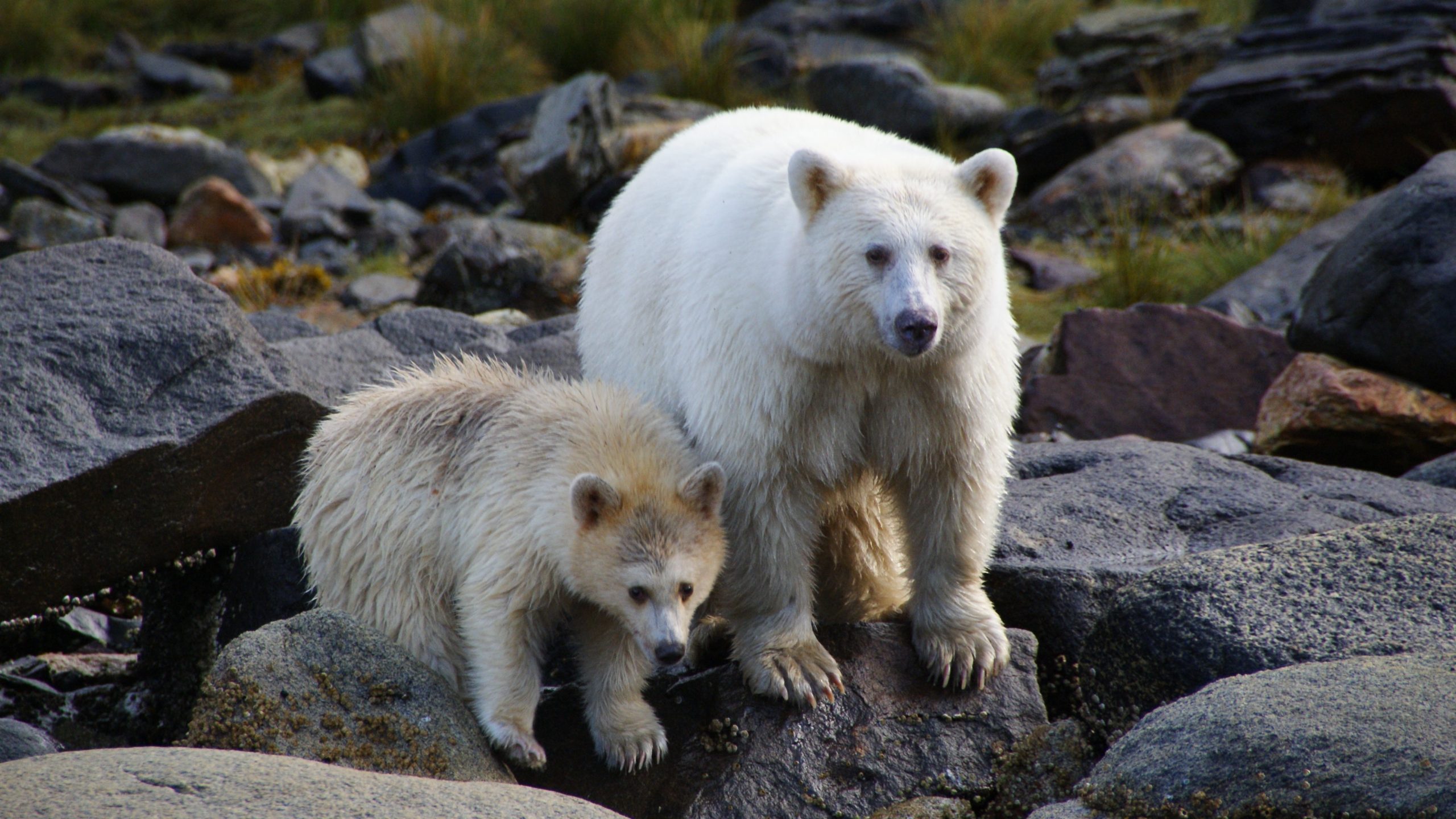 So, who are these rare white bears?

Although they’re now known as spirit bears, the Gitga’at Nation calls them Moksgm’ol. And boy, they’re hard to find! ‌The Gitga’at Nation tells a story that the raven left one in ten bears white to remind them of the Ice Age when things were clean and pristine. 1

With only an estimated 200-400 of these white bears in the wild, photographers have had to sit days at a time in the wet rainforest of Canada just hoping to catch a glimpse of them.

Contrary to what you may be thinking, this white bear is not an albino bear—nor are they a polar bear who has traveled into a new environment. Their eyes and skin have pigment, which wouldn’t be the case with a bear with albinism. Instead, spirit bears are black bears with a white recessive gene that causes their unusual coloration. 2

In the Great Bear Rainforest, black bears (including the spirit bear) help keep the forest healthy. They take their salmon into the forest to eat far away from the menacing grizzly bears, and this transportation of marine life enriches the forest with nitrogen for the trees! 3

‌To add to all of this goodness, the spirit bear ends up catching more fish because its white coat provides more camouflage with the daylight. The bears in this forest play a key role in the survival of the whole ecosystem!

Unfortunately, like so many others, the spirit bear has faced threats like logging of its habitat, trophy hunting, oil spills, overfishing, and now, climate change. However, they prevail as the world begins to learn more about them.

Catch a glimpse of a ghost!

The rarity of the spirit bear has captivated the masses and has therefore helped the efforts of many organizations pass legislation to protect them and their habitat. People travel from all over the world to see these special bears. Some even say seeing them invokes a spiritual or sacred feeling; that their white fur speaks to something deeper in the soul.

While keeping them secret used to keep them safe, times have changed. And now, rising tourism and awareness about these white bears has actually helped to save them, their people, and their habitat!

It’s incredible to see the relationship the bears have with the tour guide in this video. Take a journey into the world of the spirit bears and catch a glimpse of their magical presence in this video from Canada C3.

‌Thank you, Canada C3, for this informative and beautiful video of spirit bears!

To learn more about how these bears are helping save this ecosystem, check out this article from The Smithsonian! You definitely won’t want to miss out on the amazing photos they have.

A Solution in the Forest

The gasping pause of breath one might take when seeing the spirit bear for the first time has been just the pause needed to bring aid to this forest and its massive ecosystem.

It almost seems as though the spirit bear and the First Nations people of the region knew exactly when the time was right to unveil the secret of their existence. By coming in contact with the people when it did, it seems like the bear almost knew that its existence was so majestic, that it would lend a hand to the conservation of the forest as a whole.

Since its arrival into the hearts and imaginations of people all over the world in the 1990s, the popularity of this rare bear has also brought tourism and income to the First Nation’s people, like the Spirit Bear Lodge, owned by the Kitasoo Xai’xais people with the mission of building capacity and employment opportunities for the people of Klemtu. You can support the bears and the First Nation people by engaging in tourism in the area, such as by staying at the lodge!

But wait, it gets even better!

The attention on this bear also helped bring about The Great Bear legislation passed in 2016, which finally brought protection to this old-growth forest! Old-growth forests like the Great Bear Rainforest are home to rich soils, ancient trees, and are extremely biodiverse.

Their large, old trees help collect massive amounts of carbon, pulling it from our atmosphere and trapping it in the ground. 5

This forest is about the size of Ireland or Massachusetts—about 6.4 million hectares. And the protection from this legislation will help conserve about 85% of the forest, in addition to helping to preserve the whole ecosystem, including the beloved spirit bears! 6

Because of the knowledge about this special bear, there is now protection in place for the Great Bear Rainforest for the long run!

Look around your own environment and community to find the hidden key that holds a way to bring the help that is needed. Do you all have a unique tree that the world might love? Books that have been held onto for generations?

It may not be as big as a bear, but I’m sure it is there. There is much work to do to help create a more positive future for us all around the world, and we need each other to look at our hidden talents (or generational secrets) in a new light to make that happen.

When we look closer at what nature, our communities, and what we as individuals have to offer, we can often find a solution that solves many problems at hand, all at once.

Here are some amazing ways others have done just this!

From Fish to Fashion: When A Fishing Net Becomes A Hat!

What if we looked at the life cycle of every item we purchased and thought "Where did this come from? What will happen when I'm done with it?" This company has figured out how to solve a problem for a community of fishermen and save wildlife by giving some of the ocean's most harmful pollution a new, more fashionable, life.

Heroes from Table Scraps: How Oysters Are Protecting NYC!

New York Harbor is the cleanest it's been in over a century and it's thanks to a delicacy many of us love to slurp down...oysters! Using nature's knowhow, table scraps, and a little ingenuity, oysters are bringing life back to polluted waters and protecting one of America's most beloved cities!

How can farming blend scholarship, tradition, empowerment, and service to the community? MA'O farms in Hawaii is empowering the young people of Oahu's Waianae coast with a program that is changing countless lives and building a stronger future!

Bring your joy to the surface and share it!

Brittany has been writing and creating stories since childhood! She graduated from Holy Family University with a degree in communications, is an avid world traveler (five of the seven continents!), lover of nature, and spends her days working to connect to the world in deeper ways. Have any questions about the awesome world of rocks and crystals? She's your gal. 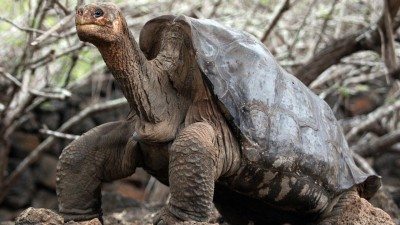 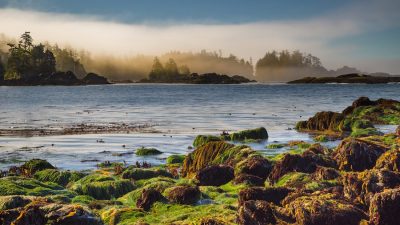 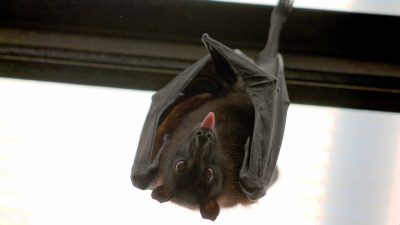 Why You Should Thank Bats for Your Next Margarita!

Do you hate mosquitos but love tequila? Your new favorite animal may be a bat! These flying mammals may get a bad rap, but they are actually some of nature’s most important species and are responsible for some of our favorite foods.