Across the deserts of New Mexico, a fearless predator roams the night. Her prey? The most venomous scorpion on the continent. Standing at just 4 inches tall, this formidable hunter has been locked in a battle with her venom-filled meal for thousands of years! But I’m not sure what’s more surprising: the trick she’s devised to defeat them, or her adorable mouse-sized battle cry!

So, who is this small but mighty creature? Ah, well she’s the tiny hero of the desert you didn’t know you had until just now. With the ability to turn toxins into painkillers, this tiny powerhouse can take sting after sting from a scorpion known to send hundreds of people to the hospital every year!

Now,  get your night vision goggles on, because we’re heading out on a wild ride to take a look at how she’s managed this in one of nature’s most incredible evolutionary arms races! 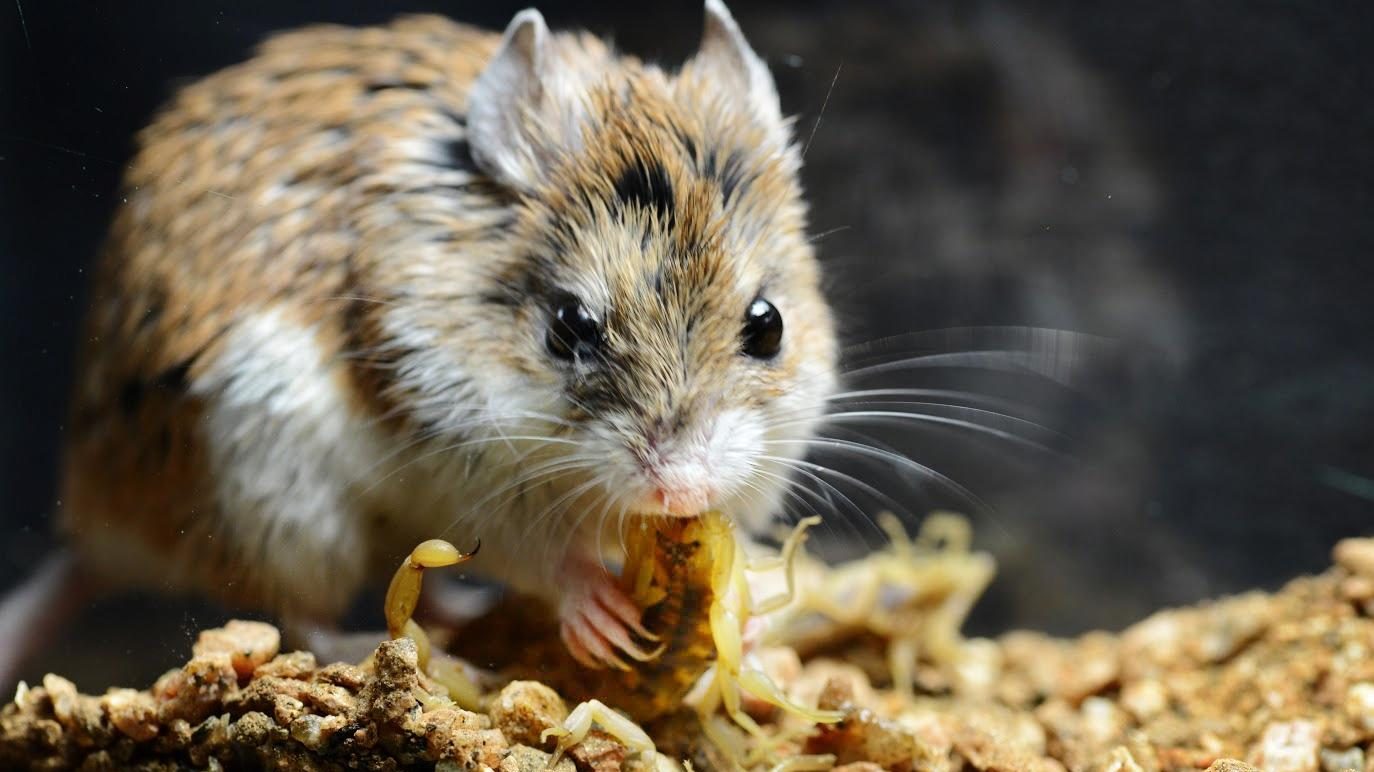 Let’s meet the two sides of this epic evolutionary battle.

In our predator corner, we have our adorable southern grasshopper mouse. With their little fluffy bodies and innocent big black eyes, they don’t look like a fearsome predator—but don’t be fooled. While most other mice are happy to snack on seeds and plant matter, grasshopper mice are mighty carnivores, feasting mostly on insects, and even the occasional lizard. 1 But when it comes to snacking on one of their favorite treats, scorpions, sharp teeth don’t cut it. For that venomous prey, they have developed their own secret weapon!

Oh, and if their penchant for prey that fights back wasn’t enough, they are even known to howl—yeah, like a wolf— before a hunt, presumably to claim their territory. (Don’t worry, we’ve got a video of that adorable cry to share with you later.)

So, who is in the other corner?

Well, in this case, it’s the Arizona bark scorpion. It goes without saying that as the most venomous scorpion in North America, these are not the dinner of choice for most creatures. After a sting from one of these guys, most adult humans would need medical attention. Seriously, their venom is no joke! But, if their insane venom doesn’t strike you, these guys have another fascinating trick up their sleeve: shine a black light on these painful arachnids and they will light up the night with their glow! 2

Now that we’ve met our two worthy opponents, it’s time to explore the evolutionary battle that has been set in motion to create them! Here’s one of our favorite YouTube channels, Deep Look.

If you want to explore the tiny wonders of the natural world, then Deep Look is the place for you. With incredible videography of some of the world’s smallest natural wonders, a trip through their library is a magical experience! Go check them out! Here’s one of our favorites to get you started!

Your Dog is Traveling Through Time… With Their Nose!

From finding missing people, sniffing out bombs, and even detecting health problems, dogs' remarkable sense of smell continues to impress. But what's actually going on inside those beloved noses?

The Battle of Mouse and Scorpion

Think about how remarkable it is that a mouse has developed a way to turn scorpion venom into a pain killer! The process of evolution has created some amazing adaptations. Imagine all the potential there is to unlock if we found ways to apply those solutions to medicine, engineering, or technology!

If you want to get a better appreciation for the evolutionary tug of war that grasshopper mice and scorpions have been in for generations, give this following episode of the incredible podcast, Short Wave, a listen. It’s NPR’s science podcast, and it is a part of my daily routine!

With episodes under 15 minutes long covering all kinds of scientific topics, it’s my new favorite way to wake up in the morning.

In this episode, the host, Maddie Sofia, talks with two scientists: one who studies the grasshopper mouse, and the other, scorpions, to learn more about the fascinating way these two have been locked in an evolutionary arms race. Take a listen!

And now… *drumroll*, as promised: the ferocious howl!

I wasn’t going to leave you today without experiencing the promised howl of the grasshopper mouse. Gather your friends because this is the most adorable thing you’ll see today!

I know. Adorable, right? Who knew your new favorite creature was a mouse!

There are so many creative ways nature has figured out to solve problems!

How many battles like the one between grasshopper mouse and scorpion have been going onto for thousands of years?

There are so many ways nature has figured out how to solve problems that we could learn from. Whether we discover new pain treatments from feisty mice, learn to create silent bullet trains by studying the beaks of birds, or create new building techniques inspired by termites. There’s an answer for almost every problem that nature has found a way to solve! We are only starting to scratch the surface when it comes to finding innovative inspiration in the natural world.

If this topic interests you, check out a few of these articles we’ve written featuring ways we are learning from nature to develop new innovations!

Would you believe that your genes are super similar to a fruit fly's? They've been helping us discover our own bodies for years, here's how...

Getting Energy from our Food Scraps!

This innovation is giving our table scraps value! Impact Bioenergy has created a zero waste system to turn our food scraps into energy and nutrient-rich biofuels, all with the help of microbes.

Is it the Age of the Bacteriophage?

A tiny, powerful hero in the face of antibiotic resistance is living all around us. Meet the bacteriophage: bacteria's natural sworn enemy and the deadliest organism on the planet that, amazingly, doesn't harm us at all.

That’s right, we’ve launched an app! If you need a break or want to wake up to a little dose of positivity every day, we’ve got you covered! Subscribe now for only $.99 per month, or $9.99 annually over in the Apple or Google Play stores! 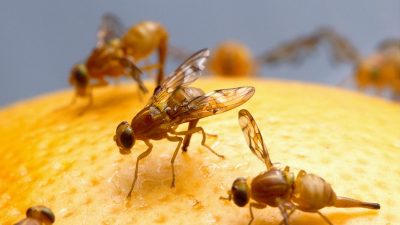 Would you believe that your genes are super similar to a fruit fly’s? They’ve been helping us discover our own bodies for years, here’s how… 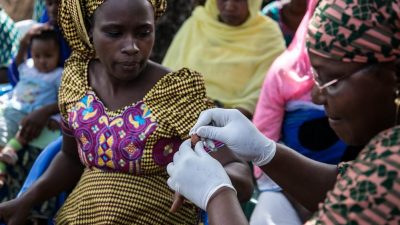 Detecting malaria can sometimes be difficult in the most rural places, but engineers have come up with a clever way to detect it with magnets! Here’s how this life-saving innovation works! 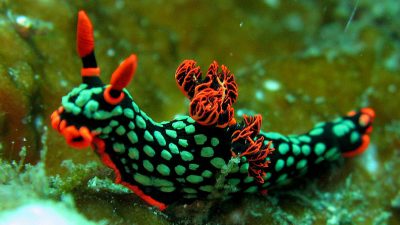 The Sneaky Smarts of Sea Slugs

From sporting bright colors to a touch that really stings, sea slugs have adopted quite a few interesting traits to keep them out of the mouths of predators. Our world only gets more interesting the more we know about our fellow inhabitants, so let’s spend a moment with these unique ones! 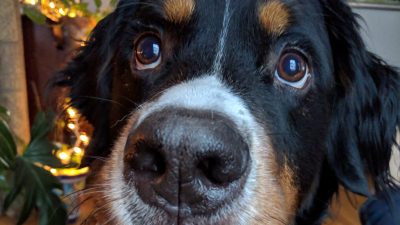 Your Dog is Traveling Through Time… With Their Nose!

From finding missing people, sniffing out bombs, and even detecting health problems, dogs’ remarkable sense of smell continues to impress. But what’s actually going on inside those beloved noses?