Did you know there has been an astonishing spacecraft called Cassini exploring Saturn for 12 years, and that it ended its mission in an exquisitely grand way only recently?

Most people have not heard about the remarkable reason why the Cassini Mission had to end in a death dive!

We will share that bit of wonder with you today, along with so much more. 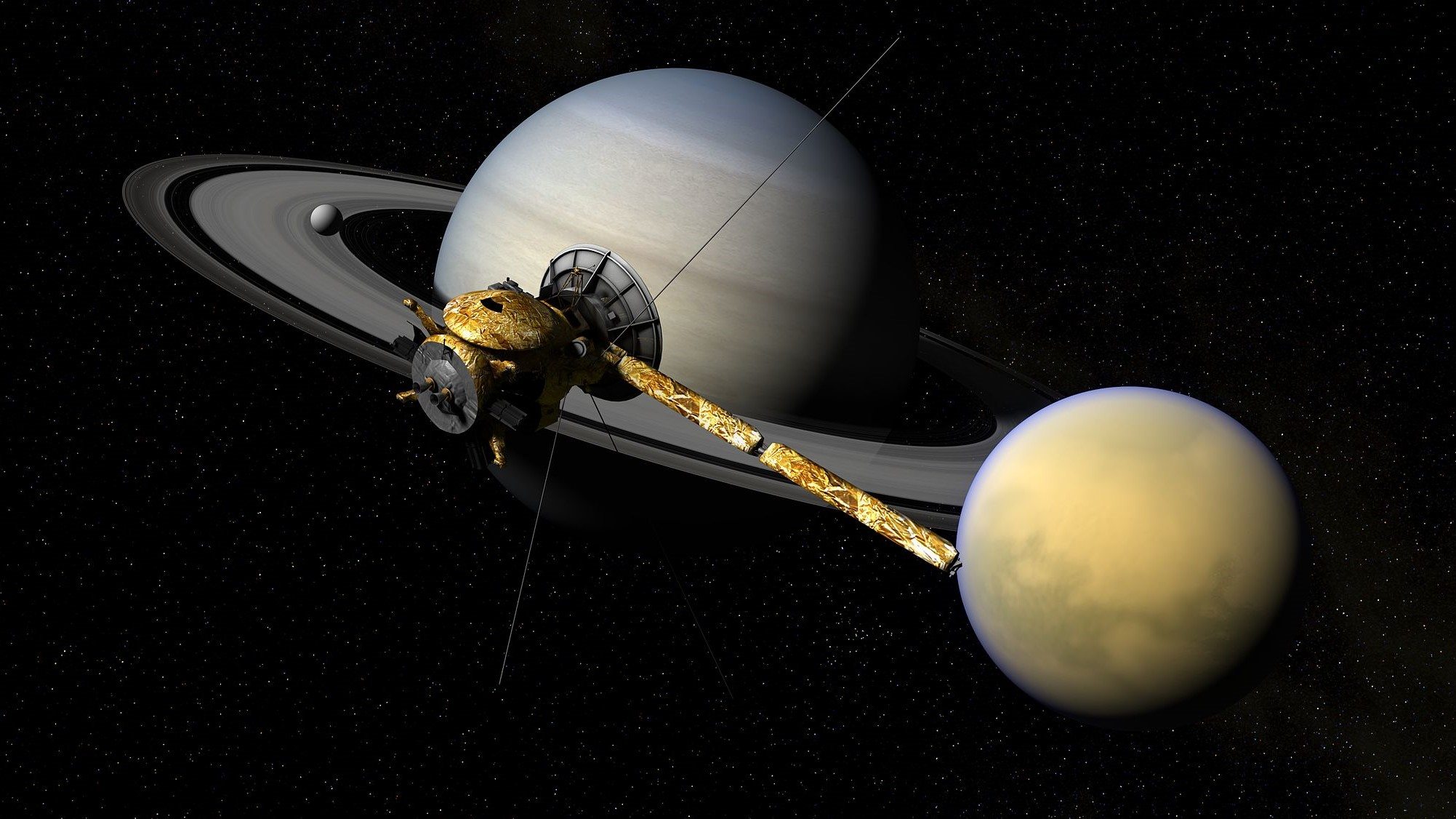 So why haven’t we heard about this before? I suspect that it’s thanks to the relentless negative focus of the mass media that most of us barely knew anything about this amazing story of technology, space exploration, and discovery going on for the past two decades.

But that’s why I founded Ever Widening Circles (EWC): to celebrate all the remarkable things happening in the world. And after publishing over 1,000 articles here on science, the arts, technology, sports, and every other field under the sun, I can tell you, unequivocally, that the world is not going to heck in a hand-basket. Really! It’s still an amazing world.

Have a look at our archives if you want your worldview to be completely revived!

So let’s get to it. (We’re going to cover today’s wondrous topic like a rug!)

Today, we’ll point you to an extraordinary leap of the human imagination: The Cassini Mission.

Four decades ago – when computers were not nearly as capable as a cheap cell phone is today – someone put forward a crazy idea: let’s combine the efforts of 27 countries and create a mission to study every aspect of Saturn that we are capable of investigating.

In 1997, the Cassini spacecraft was launched to do just that. And oh what an adventure it has taken us on! 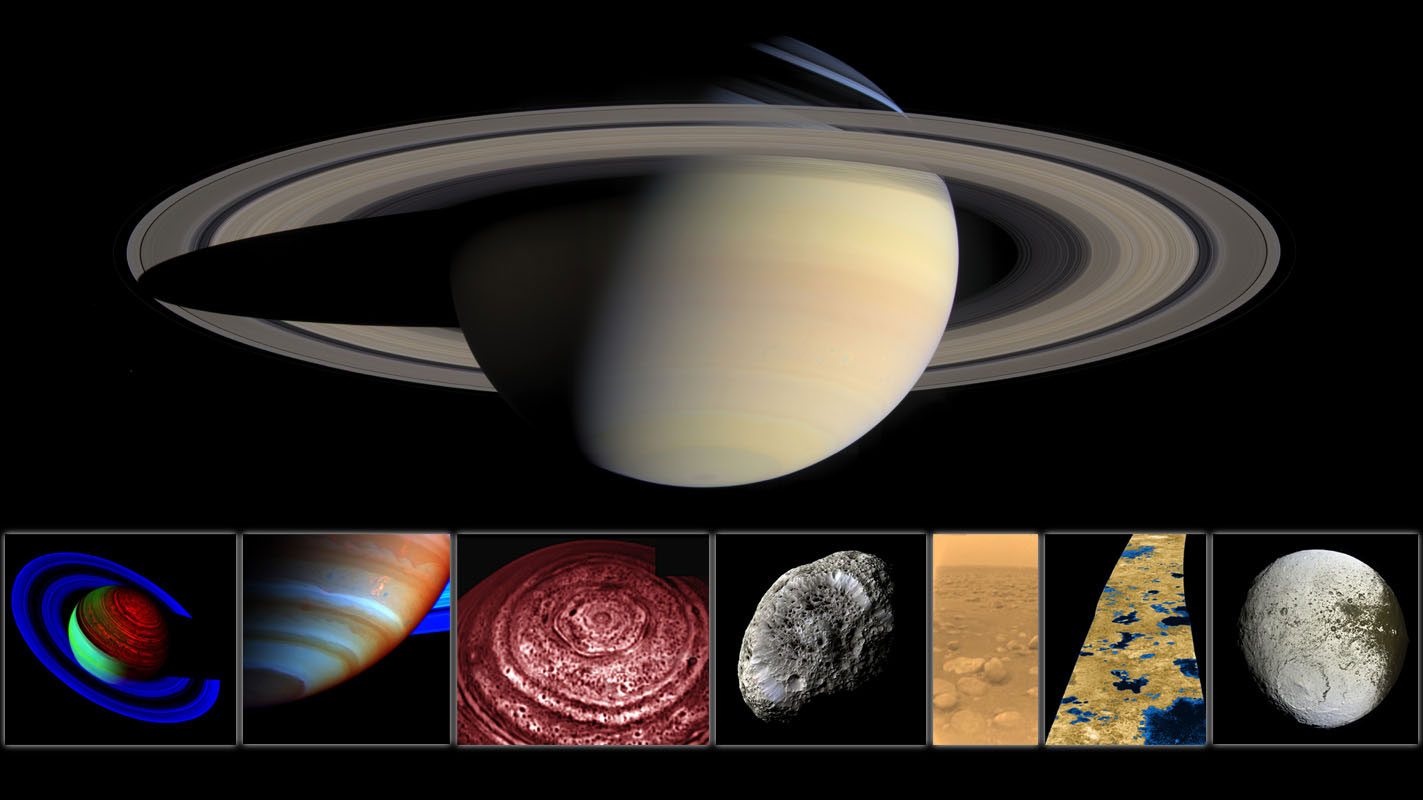 During its astounding mission, Cassini advanced our understanding of our corner of the cosmos in immeasurable ways. On Friday, Sept. 15, 2017, the craft – which has finally run out of fuel – was purposefully programmed to make an elegant swan dive into Saturn’s atmosphere. There, it disintegrated completely, and did nothing to mar or alter the pristine elegance of the Saturnian system of delicate rings and fantastical moons.

We combed the web for the best videos on this wonderful story, found a few that will put a spring in your step, and make you the smartest person on the blanket the next time you are stargazing with friends.

Thanks to PBS News for that concise synopsis. If you’d like to see the entire documentary that got me all fired-up about Cassini, you can find it here on PBS’ NOVA: Death Dive to Saturn.  It’s an amazing video to dive into yourself.

If you want to catch that later, let’s have a look at some of Cassini’s wondrous sights and discoveries now…

Can you believe all that? What a wonderful piece made by the YouTube channel called SkunkBear. If you love science or know someone who does, be sure to turn them on to the videos at SkunkBear!

We can only hope school children and science-loving adults will stumble upon this article or the story of Cassini somehow. Perhaps it’s time to take a role in spreading this kind of news when the mass media is failing to celebrate things. Share this article if it inspires you, you never know whose day you might make!

The wonder of it all, through to a graceful end

Saturn has sixty-two moons of magnificent variety! So many that it resembles its own planetary system.

Here’s the extraordinary timeline. It’s worth enlarging to look closely: 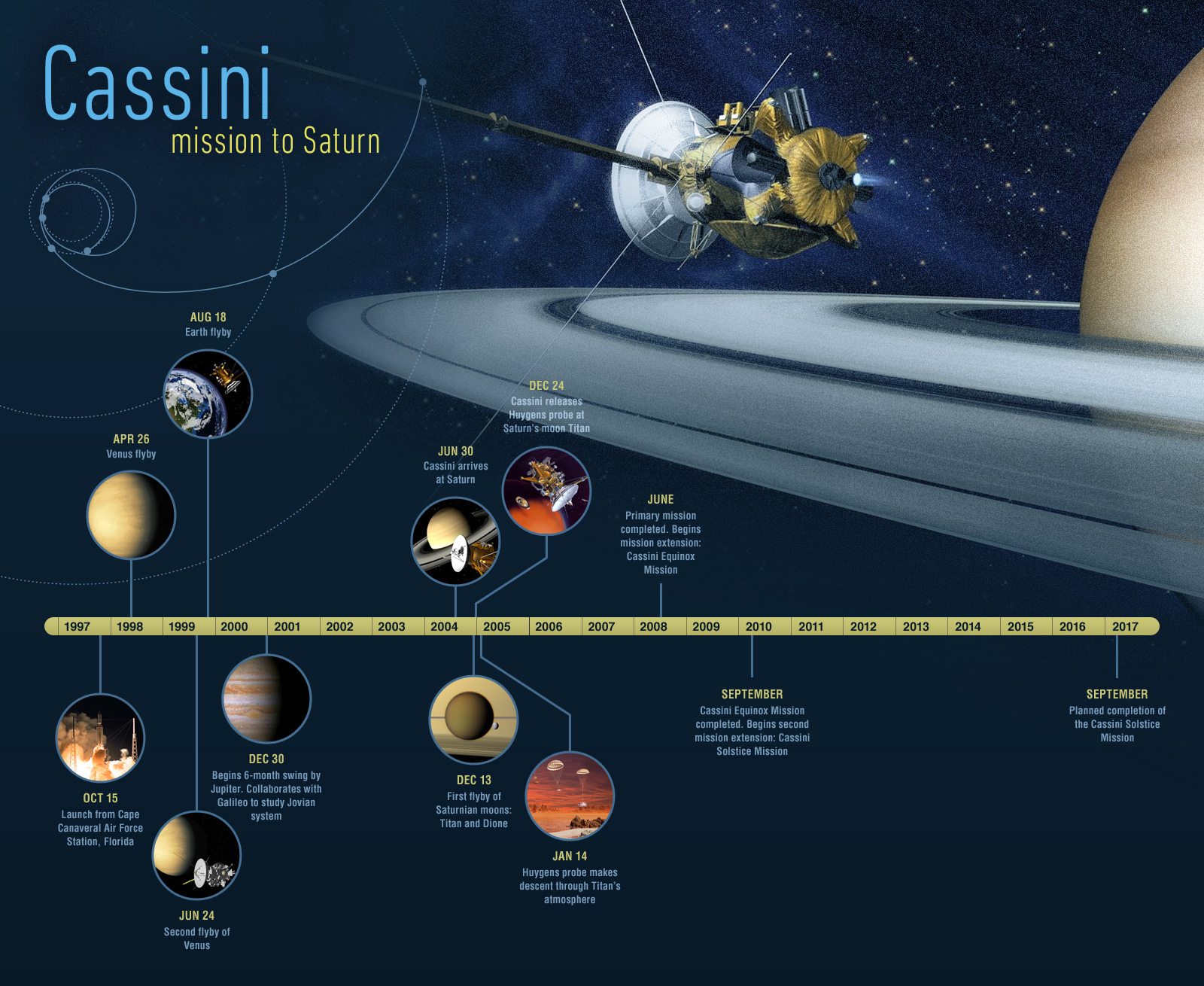 The spacecraft survived so many extraordinary perils! Cassini made many passes, closer and closer to the rings and the moons, and if it had even one collision with only one small particle, the mission would have ended in disaster.

It seems miraculous that the mission went off, for decades, without a hitch.

Next up, here is a very short video with Cassini’s final and inspiring photos as it plunged toward its end.

If you can’t get enough of those kinds of images, then you need to take a look at the piece the New York Times did with the 100 best images taken by Cassini.  Most are jaw-dropping in the sense of wonder they inspire.

And the reason for the Death Dive?

One of the small, extraordinary moons that Cassini discovered, Enceladus, is an icy ball that is one of the brightest objects in our solar system.

After several close passes, scientists discovered that Enceladus may have an ocean much like ours beneath its frozen crust. And there is evidence that the floor of that ocean may also contain volcanic gas vents just like those in our ocean depths. In our oceans, these vents team with alien-seeming life forms. 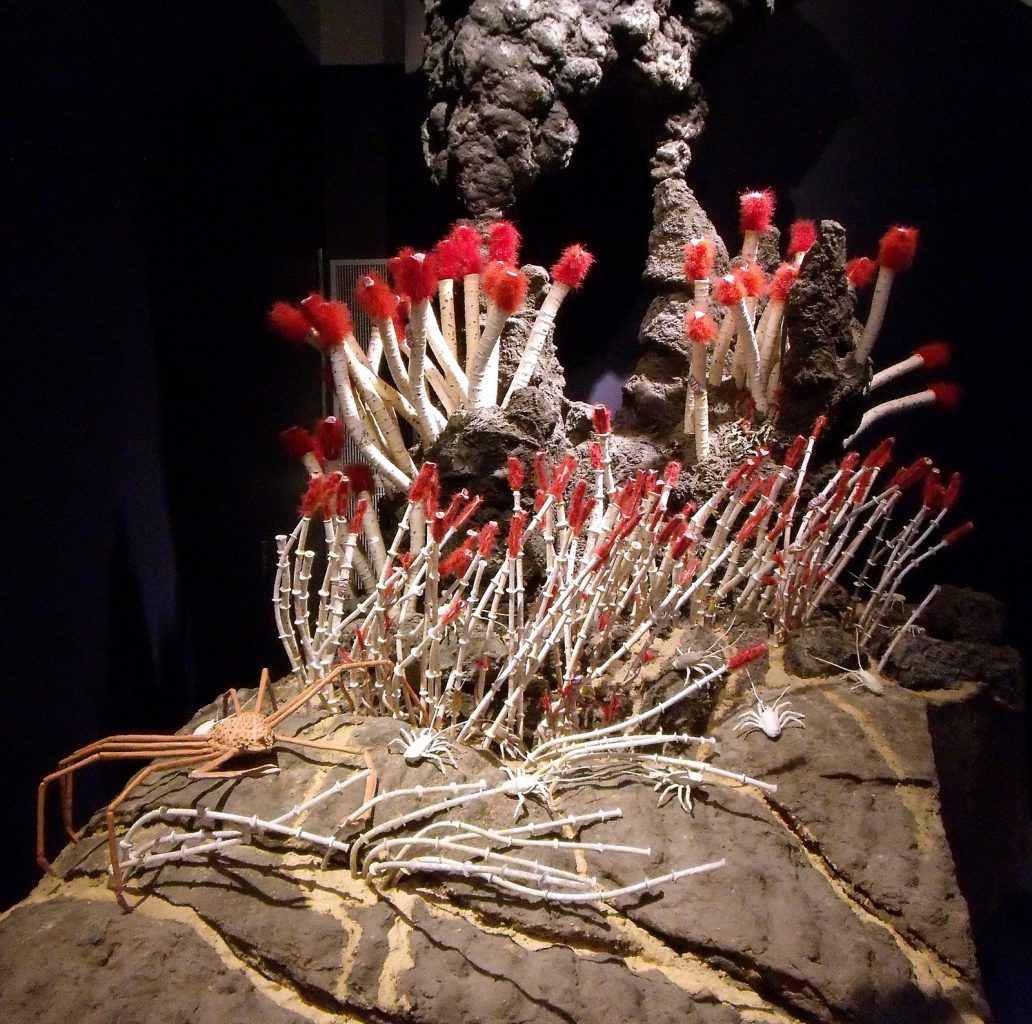 Hmm? Now here’s something profound that expands all of us: Enceladus might be the best place in our solar system to find other lifeforms.

The fear is that if we do not destroy Cassini, it would be left to eventually crash into one of Saturn’s moons. If it harbors bacteria from right here on Earth, that could contaminate Enceladus’s ocean or one of the other moons’. That’s an astounding consideration, isn’t it? And it’s lovely to see our species finally caring about the ethics of our impact on other lifeforms!

For a few more wonderful short videos of Cassini’s last few hours, visit this link on the NASA website.

We’ll go out today with just one of the videos from there, but don’t miss seeing some of the others. All of them will remind you of the Humanity involved in this grand human collaboration.

Why should we care?

“Imagine knowing the only set of encyclopedias in existence were across an ocean. Wouldn’t you want to build a boat? Our solar system’s planets and moons are those encyclopedias.” 5 – Brian Resnick for Vox

Let’s keep re-writing our own encyclopedias of knowledge by sharing information that expands us all. We’ll keep it up here at Ever Widening Circles!

You keep stopping by, sharing, and getting the word out about the fact that it is still an amazing world!

Want to continue to ride this wave of wonder?
Does reading articles about space take your mind out into the galaxy of curiosity? Awesome, you’re in luck! EWC loves all things space, too! We have tons of articles about space discoveries, space exploration, and even our possible neighbors in space! Click on the button below to start your journey into space, in the comfort of your own home!
Space on EWC! 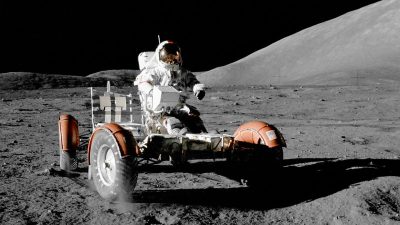 1972: The Last Time Humans Set Foot On the Moon

It’s been over 45 years since we left our last footprints on the moon. The Apollo 17 moonwalks and mission were spellbinding. Here’s an amazing video! 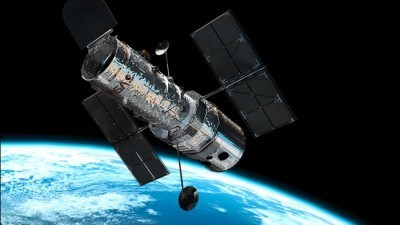 Nothing inspires wonder like space! And we might not even realize that we have a 25 year old “workhorse of technology” orbiting our planet, expanding our view of ourselves. 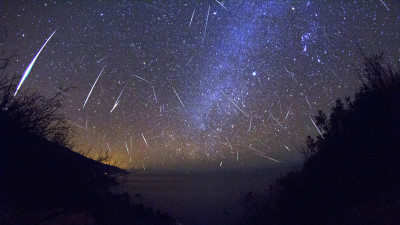 Want to spend some time in an “old school” state of wonder? Take someone you care about with you on a trip to outer space tonight or tomorrow night. You may end up with more fun than you expect!

Can old bones give us clues to how the avocado cam

Is there something that you do just because it fee