Have you ever noticed how certain animal sounds can pluck an ancient, reflexive chord in us? Take, for example, the sound of a coyote or wolf calling across misty fields, farms, parks, urban wastelands, and our neighborhoods.

Remarkably, we will all be hearing a hybrid call more often and we hope to demonstrate today how that is an amazing thing.

Definitely a creature that demonstrates this is still an amazing world. (Our motto here at EWC!)

In today’s EWC article we will share the remarkable story of one of the most adaptable species on our planet. The coyote has started mixing with the eastern grey wolf. This hybrid, now officially referred to as a coywolf may be something new to our landscapes.

Nothing to panic about! We hope to shine a light on facts that demonstrate that we can trade our fears for a little more wonder and amazement. We might even find they improve our landscapes both urban and rural. They may actually help us control other species that ruin our yards and gardens, damage property and spread diseases.

Who knows, maybe by the end of this piece, we can even get this ball down the field as far as welcoming this nearly harmless, clever predator back into our lives. 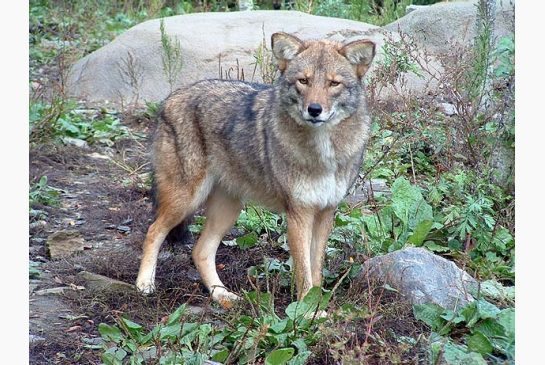 The event that got me interested in this subject happened a few months ago. I was sleeping with the bedroom window cracked on the first warmish night after a long winter in Vermont, and our bed is situated so our pillows are essentially in the window sill.

I love to lay wide-eyed and peer out at the night sometimes. It was about 3:00 a.m. and the moonlight on the remaining snow left a blue glow on the landscape.

Suddenly I became aware of a dark, hulking figure navigating in and out of the deep woods on the edge of our yard. It bounced along purposefully, nose to the ground, and then suddenly it stopped to look right at my bedroom window, seemingly straight into my curious eyes.

But it was 50 yards away, our house was dark, and my window was barely cracked: how could it know I was there? 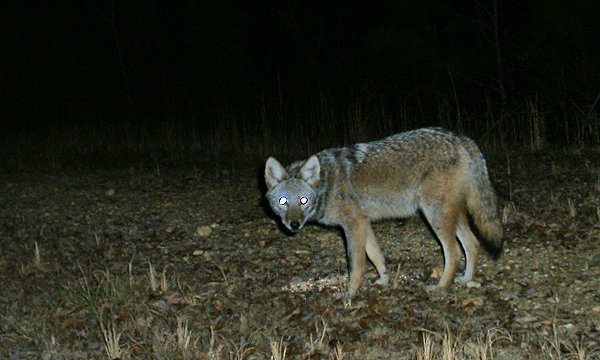 Then I thought, “moments earlier, could it have been right under my window, thereby knowing our scent and alerting this critter to the notion that the cracked window held a dangerous occupant?”

Or was this animal so exquisitely in tune to its surroundings that it could perceive every breath I was taking?

So large was this particular coyote that I suspect it was a coywolf.

We spent several minutes in a dance of connection: he watching me, me testing to see if he could perceive my slight movements. It was an amazing five or ten minutes; one of those rare instances where time seemed to stop and I was left with more questions than answers.

Next morning, I went to work to learn more. Here’s one of the first videos I came across as I was looking into this, brought to us by a great informational channel, THIRTEEN:

The complete version of the Nature episode they are referring to is fabulous, and to see it, just search “Meet the Coywolf” on Netflix.

Absent that, I’ve done more research for us to run through today, and I’m happy to say that I am now delighted to suspect that coywolves are in my woods. The benefits turn out to far outweigh the drawbacks, and let’s start by taking down those myths that fan our fears.

First: We are not going to be attacked by marauding coyotes or coywolves.

I found a great research project that is studying coywolves that gives us the statistics we need to move away from that notion.

You can have a look at their stats for yourself there, but the bottom line is that 15 to 20 people die of confrontations with dogs every year in the U.S. (from the 4.7 million dog bites per year, 1000 per day go to the hospital) but there have only been 2 deaths in the last 500 years related to coyotes. 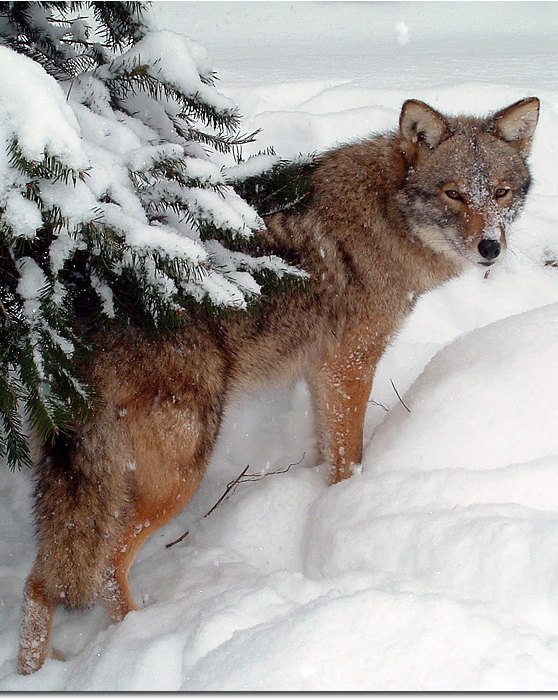 That’s the size of my son at age 4. I’m not going to get my socks in a knot over an animal that size.

Coyotes and coywolves are more often searching for food as individuals, taking anything small when the opportunity arises. They eat everything from fruit to mice, rabbits, woodchucks, and deer when available.

After really looking into this, I’m no longer concerned about running into coyotes or coywolves on a walk in our woods or for that matter, even the eastern grey wolf is now off my radar screen.

I discovered a great study done in 2002, by Mark E McNay for the Alaska Department of Fish and Game that looked at wolf attacks in Alaska and Canada, and found that “despite (a) large and widely distributed wolf population, no human deaths have been attributed to wild, healthy wolves since at least 1900.” 2

Good enough. Our local lore about vicious coyotes, coydogs, and coywolves may be like stories of the fish that got away. 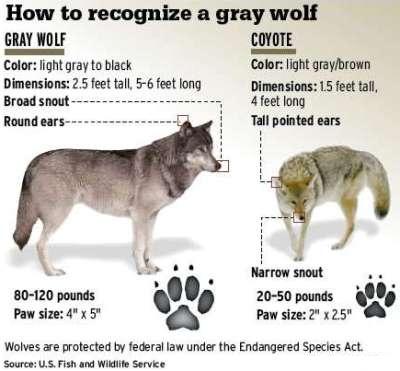 The coywolf is somewhere in between these two animals’ descriptions. Source: U.S. Fish and Wildlife Services

Speaking of local experience with these hybrids, here’s some natural history: here in Vermont (and I suspect many other places) locals have been noticing these supersized coyotes since the 1970s, calling them “coydogs,” based on the assumption that new kid on the block was the result of interbreeding with massive wild dogs.

The intuition about the hybridization was correct, but the source wrong: it turns out that our scrawny 40-pound western coyotes were interbreeding with eastern grey wolves from the Canadian North and then these new, more successful canines have been steadily migrating south.

Now before you go all “Annie Get Your Gun” on me, hang in there!

Aside from the rare occasion when these new predators will attack the occasional backyard cat or farmer’s calf (and these instances will be remarkably rare), there is no evidence yet demonstrating that they will do anything but continue to slink around in the dark on the fringes of our awareness in the future. 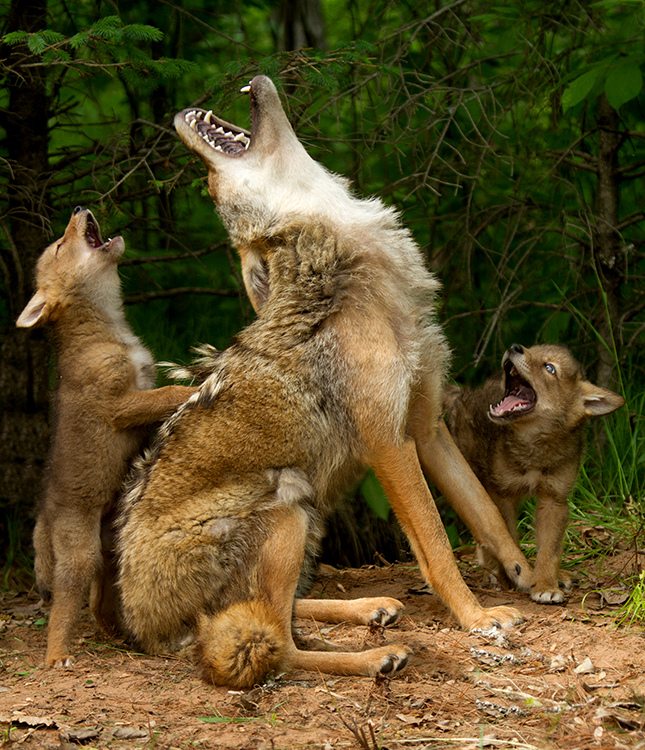 In fact, nightly visits from coyotes and coywolves may even be some sort of a blessing in some areas!

What if there was finally an urban resident of the night that could bring down populations of rats? And how might they help us with the unchecked growth of deer populations in suburbs? Or neighborhoods where deer have become gardeners’ worst nightmare?

Do know that the rise in Lime Disease is intertwined with the rise in the many small warm bodies (mice, rats, raccoons, and skunks)? If the new coywolf and even the savvy western coyote become fixtures in our increasingly complex environment, maybe they can go a long way to restoring the balance that was lost when we removed all the top predators.

And as reclusive as they are, we would barely know they were out and about.

In urban environments, it is conceivable that they could help correct the imbalance of pests that are rabies transmitters like raccoons, skunks, and feral cats. They might also decrease the urban white-tailed deer populations that decimate backyard landscaping and gardens.

I know plenty of folks who would be happy to keep their cats in at night in order to let a predator save their yard from the ravages of white-tailed deer.

I am one of those people! Since losing our aging German Shepherd, the deer have eaten every flowering shrub I once carefully tended down to the twig. 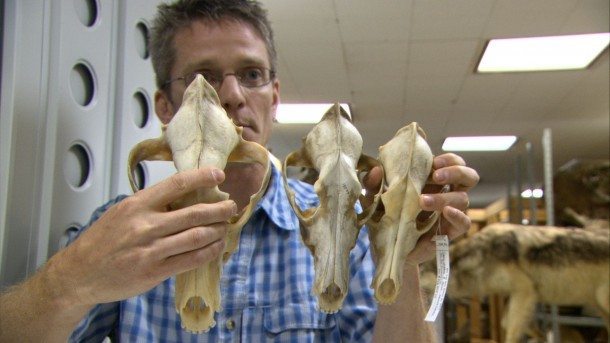 The skull on the left is a grey wolf, the one on the right a coyote, and the middle is the “hybrid” coywolf. Source: Coywolf Inc. // Thirteen

Now that we know more, I’m going to be happier hearing that spine-tingling howl every night. In fact, to save my beautiful garden, I might even put our welcome mat out for our local coywolf!

Here is another clip from that amazing video about the new coywolf. After watching, we were so spellbound that we just had to share it with you. It’s like a little window into the unseen world all around us.

You will never look at your darkened backyard or urban street the same.

Here it is, brought to us by PBS Shows.

Thanks for stopping by EWC today for a new insight or two.

Explore the site, and remember, stay open, curious and hopeful!

Discover more of the amazing animals we’ve featured by clicking the button below! 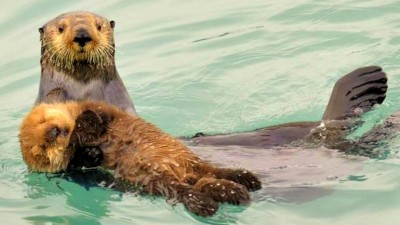 Otters: Much More Than Cute!

Sea otters and thier caregivers have a lot to teach us about coping with stress, even if its just for 18 minutes while you take a look at todays video-shares. 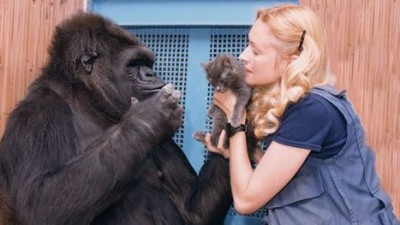 Do you remember the beautiful documentary from the 1990’s about Koko the Gorilla and her kitten? Koko learned sign language and has been teaching us about the world through her eyes ever since! 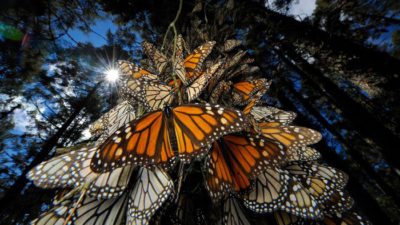